Exploitation of Canada's tar sands and shale gas will have dire consequences for the environment, says Chomsky 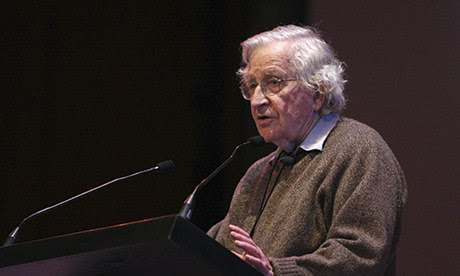 Canada's rush to exploit its tar sands and shale gas resources will destroy the environment "as fast as possible", according to Noam Chomsky.

In an interview with the Guardian, the linguist and author criticised theenergy policies of the Canadian government under Prime Minister Stephen Harper.

He said: "It means taking every drop of hydrocarbon out of the ground, whether it's shale gas in New Brunswick or tar sands in Alberta and trying to destroy the environment as fast as possible, with barely a question raised about what the world will look like as a result."

But indigenous peoples in Canada blocking fossil fuel developments are taking the lead in combatting climate change, he said. Chomsky highlighted indigenous opposition to the Alberta tar sands, the oil deposit that is Canada's fastest growing source of carbon emissions and is slated for massive expansion despite attracting international criticism and protest.

"It is pretty ironic that the so-called 'least advanced' people are the ones taking the lead in trying to protect all of us, while the richest and most powerful among us are the ones who are trying to drive the society to destruction," said Chomsky.

Those protests come on the heels of the indigenous-led Idle No More movement that sprang up in late 2012 in response to the Harper government's repeal of numerous environmental protections and aggressive promotion of resource projects, often on indigenous lands.

Chomsky was in Montreal last weekend to give a lecture and celebrate the 50th anniversary of the magazine Canadian Dimension.

He told the Guardian that progressives "should work climate change into their efforts to organise", but in a way that emphasises how addressing climate change can improve rather than worsen peoples' lives.

"If it's a prophecy of doom, it will act as a dampener, and people's reaction will be ok, I'll enjoy myself for a couple of years while there's still a chance. But as a call to action, it can be energising. Like, do you want your children, and grandchildren, to have a decent life?"

While supporting the principles of the "degrowth" movement that aims to reign in over-production and over-consumption, Chomsky cited mass transportation, localised agriculture, and energy efficiency improvements as useful forms of growth that could mitigate climate change and improve quality of living.

"If you could take a subway from the suburbs in Boston, where I live, to downtown in 10 minutes, that improves your life over sitting in a traffic jam. People should see that."


Chomsky said that a "major issue" behind climate change is the deficiencies of the market system.

"Markets are lethal, if only because of ignoring externalities, the impacts of their transactions on the environment," he said.

"When you turn to energy production, in market exchanges each participant is asking what can I gain from it? You don't ask what are the costs to others. In this case the cost to others is the destruction of the environment. So the externalities are not trivial."

Chomsky said during the 2008 financial crisis, the big banks could "forget the fact that they're supposed to believe in markets, run cap in hand to the government and say bail us out".

"In the case of the environment there's no one to bail it out."