Tired of corn, corn, corn or cane, cane, cane? There are 101 feedstocks in the biofuels canon.
Here’s what’s up with each of them, and all of them.

In Florida, Biofuels Digest released its annual Guide to biofuels feedstocks, tracking 10,658 items published in the Digest in the past 48 months on 101 feedstocks for biofuels, biopower, renewable chemicals and biobased materials.
The top 10 feedstocks, in Digest coverage

Bagasse — 234 items
The top 5 feedstocks in each category

In all, the Digest is tracking 6 aquatic species, 8 established grains & grasses, 14 established oilseeds, 15 types of wood, 23 novel feedstocks, and 35 types of residues.

“Articles about a feedstock don’t always translate into acres and tonnes,” noted Digest editor Jim Lane. “A number of feedstocks are important, especially the woods, even if they receive less attention in the form of news. Plus, it’s important to keep in mind that almost every feedstock defined as “novel” has generally been around for some time; what is novel is generally that they are being investigated for use at industrial scale.”
Takeaways

Residues are king — even though popular feedstocks like corn, cane and soy attract the most attention as individual feedstocks. The very diversity of residues — agricultural, animal, forest, industrial, and municipal – tends to disperse interest against a wide backdrop of materials. At the same time, groupings like “algae” put hundreds of strains into one category. Accordingly, popularity sometimes is driven by the way the category os drawn.

Woods? An under-considered source for biofuels — primarily because fermentation systems struggle with woods, which generally (though not exclusively) lend themselves to thermocatalytic systems, which have generally received less attention over the years. 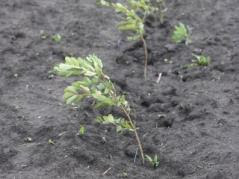 URBANA – Researchers from the Energy Biosciences Institute at the University of Illinois, evaluating the biomass potential of woody crops, are taking a closer look at the black locust (Robinia pseudoacacia), which showed a higher yield and a faster harvest time than other woody plant species that they evaluated, said U of I associate professor of crop sciences Gary Kling.

“For now the only thing you can do with it is use it for direct combustion,” Kling said. “But if it becomes a major crop other researchers could start working on the process of how to break it down,” he said. “The EBI is working on how to get the sugars out of plants and how to turn those to alcohols. It is a very tough thing to do. It’s typically been tough to break down the biomass in woody plants to make it useful for alcohol production. Our plan is to be able to take anything we grow and convert it into a drop-in fuel.”

Kling said he and his team’s role in the EBI’s feedstock production/agronomy program, is to improve the production aspects of bioenergy crops. While other researchers in the program have evaluated miscanthus, switchgrass, and prairie cord grass, Kling is examining which short-rotation woody crops grow best in the Midwest.

“Robinia pseudoacacia is showing great potential as a biomass crop for Midwestern energy production, out-yielding the next closest species by nearly three-fold,” Kling said. “We picked the best crops and moved those forward. Other crops may catch up, but black locust was the fastest out of the gate. We will pursue other crops as well for a number of years, but we want to move to the next step which is on to improved selections.”

As part of the initial study, two-year old seedlings were planted in the spring of 2010, grown over the summers of 2010 and 2011, and were then coppiced in the winter of 2011-2012. By coppicing the plants after a period of growth, or cutting the plants back from a single stem just a few inches from the ground, Kling explained that this process allows the plant to grow back with multiple stems coming from the base and shoots coming up from underground root systems.

“Black locust is effective at colonizing an area, because it freely branches like that,” Kling said. “It’s a good candidate for this kind of treatment, but not all plants will tolerate this process. It forces the plants to essentially grow up as shrubs, with more frequent harvests. By planting much closer together and causing them to branch like that, you are able to fill up available space, intercept light more quickly, and use the field resources more efficiently.”

Researchers assumed they would harvest 3 to 5 years after coppicing, which is comparable to woody crops such as the willow. “After that first coppicing in February 2012, and then after last year’s very early spring, the black locust was growing quite rapidly. It was already a foot tall when we had that freeze in the middle of April, which froze them back to the ground. They began to regrow and put out new shoots in May. By the end of last season, the plants were nearly equivalent to the first two years’ growth,” he said.

This spring, a preliminary check on the black locust crops, which included harvesting 3 plants from the edge of the field, produced a yield of 12 to 13 mega grams per hectare (Mg ha-1), which exceeded what was produced over the first two years’ growth, Kling said.

This rapid growth is what distinguished the black locust from other woody plants in the study.

“We are now looking at harvesting every 2 years rather than every 3 to 5 years as we first assumed,” Kling explained. “This would allow producers to get some payback a lot quicker from their investment.”

Based on these encouraging findings, Kling said two new experiments were started this spring, through the EBI, both looking at different germplasm for black locust crops. In the first, Kling said seedlings were ordered from 10 different commercial sources across 8 states.

“We wanted to sample as much commercial germplasm as we could to see if some are faster growing,” he said. “For example, in Hungary, with appropriate selection, researchers were able to improve yield by approximately 25 percent compared to unimproved black locust. We’re certainly in our infancy yet in terms of trying to improve and select for improved yield, but you’ve got to start somewhere and looking at different germplasm sources is one way to do that.”

The second experiment involved obtaining seed sources internationally through the USDA, including seeds from Afghanistan, Uzbekistan, and Iran. Seeds were also taken from the site of a remediated quarry area in Vermillion County where they found native black locust growing.

The seeds and seedlings for the two new evaluations were treated in greenhouses over the winter, and then planted in EBI fields this spring. Kling said he and the other researchers will evaluate whether to coppice the plants at the end of 1 or 2 years.

“Illinois has a lot of land that is subpar for corn and soybeans, such as the southern part of state and northern parts of the state along rivers. Black locust could be cultivated along some of that area in large acreage. This would be well-suited to smaller producers who want to generate some of their own fuel,” he said. “We do have some producers out there who are looking at alternatives, and there are a lot of farmers who have riparian areas that could potentially grow black locust as a minor crop, in central Illinois we’re not going to see 100-acre lots of black locust growing, though.”

Kling and his team will present the findings from their evaluations at the EBI Feedstock Symposium program in August.

The Energy Biosciences Institute is a public-private collaboration in which bioscience and biological techniques are being applied to help solve the global energy challenge. The partnership, funded with $500 million for 10 years from the energy company BP, includes researchers from the University of California, Berkeley; the University of Illinois at Urbana-Champaign; and the Lawrence Berkeley National Laboratory. Details about the EBI can be found on the website: www.energybiosciencesinstitute.org.

This drop in mod is a must see for anyone with a rocket mass heater. No changes needed to the stove at all. Switch back to regular wood at any time.