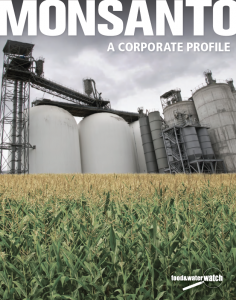 Monsanto has a long history with former and current
employees of the U.S. government, public universities and
industry and trade groups. There has been a continuous
“revolving door” between these institutions and Monsanto’s
Board of Directors and senior staﬀ, oﬀering some
explanation for Monsanto’s powerful influence in policy
and public research (see Figures 2 and 3 on pages 9–10).
Monsanto’s board members have worked for the EPA,87
advised the U.S. Department of Agriculture (USDA)88
and served on President Obama’s Advisory Committee
for Trade Policy and Negotiations.89 They presided over
multiple universities in various senior positions, including
South Dakota State University (with whom Monsanto
has a significant research agreement),90 Arizona State’s
Biodesign Institute 91 and Washington University in St.
Louis.92 Monsanto shares board members with other
corporations such as Procter & Gamble,93 Lockheed
Martin 94 and Synthetic Genomics.95
The company’s board members have been a part of the
International Food and Agricultural Trade Policy Council,
the Council for Biotechnology Information,96 the United
Kingdom Academy of Medicine, the National Academy of
Sciences Biological Weapons working group,97 CropLife
International98 and the Council on Foreign Relations.99
The prevalence of Monsanto’s directors in these highly
influential positions begs a closer look at how they’re able
to push the pro-GE agenda within the government and
influence public opinion.
Posted by Monte at Friday, April 05, 2013