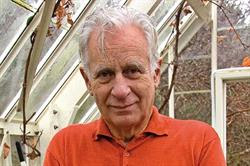 How did you get started? My first business was a macrobiotic restaurant, which opened in 1967 and was a mecca for lovers of brown rice and other organic goodies. This evolved into Whole Earth Foods and out of that came Green & Black's, the first organic chocolate.

What advice would you give to others starting out? Don't run out of cash. It's a tragedy to be making money and then be unable to trade because you can't pay your debts - even though you're profitable. And never be afraid to do something just because nobody's done it before.

What does your typical day involve? We are finalising the pack designs for seed compost and all-purpose. Our new-design kilns are ready to ship. I arranged for 10 to go to Belize for the cacao growers, who are big biochar enthusiasts after two years.

What takes up most of your time? Carbon Gold is becoming all-consuming, but it's a dream come true to be taking biochar to market.

What's the best aspect of the job? Being a missionary. It's immensely gratifying when someone "gets" biochar and becomes a true believer.

And the worst? Dealing with green amaranth on our trial field.

What is your greatest achievement? In 1993 I set up a relationship between Green & Black's and Maya cocoa farmers in Belize. This led to the first ever Fairtrade product, Maya Gold, and triggered a range of social and environmental benefits.

How do you wind down? A few games of Scrabble on my iPad, a walk along the seafront with my wife and a frantic pedalathon on my Propcycle machine.

What does the future hold? Biochar is going to change the way that food is produced and make a real difference to climate change. It amplifies the principles of organic farming, rehabilitates degraded land and reduces atmospheric greenhouse gas.

Founder of Whole Earth Foods (1967), Ceres Bakery (1972) and Green & Black’s chocolate (1991), all successful businesses based on organic, wholefood principles. Craig is the former chair of the Soil Association and currently Chair of Soil Association Certification Ltd, which authenticates organic farming, fair trade, farm assurance and has the network to authenticate carbon sequestration.