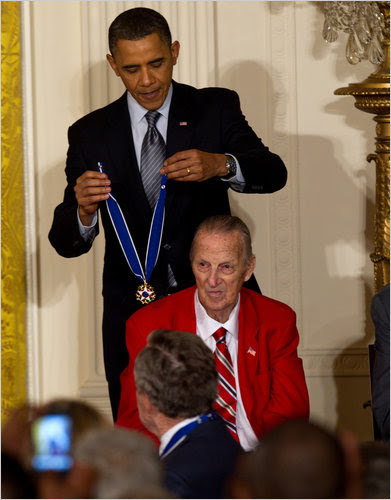 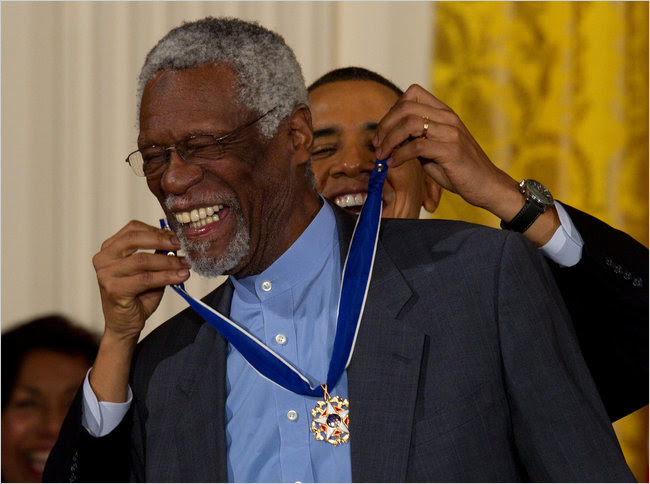 When he resided in the White House, George H. W. Bush kept his George McQuinn model first baseman glove in his desk drawer.
Once, when a gaggle of sports journalists dropped by to talk baseball, he took out the glove and displayed it. After that, it was always comforting to think that this very busy man had the option of pounding his left fist into the pocket, as an outlet.

The old Yale first baseman was back home Tuesday as one of 15 recipients of the Presidential Medal of Freedom.

“Those of us who know him know, this is a gentleman,” President Obama said during the ceremony in the East Room. Then, in a semiquizzical voice, the 44th president described how the 41st president, at 85, “decided to jump out of airplanes.”

And why did Bush jump out of airplanes? “It feels good,” Obama said, willing to take his word for it.

Bush does have something in common with two other recipients of the medal: Stan Musial and Bill Russell.

How does it feel to be honored along with those two other athletes? “I don’t know if I’m in their league,” Bush said, modest as ever.

Asked where his glove is, he sounded unsure — maybe back in Texas, as part of his collection.

There was one baseball glove at the ceremony, which honored poets and artists, activists and philanthropists. The glove belonged to Senator Richard J. Durbin, Democrat of Illinois, who displayed a childlike smile not often seen on public servants’ faces in these cranky times.

“I grew up in East St. Louis,” he said. “When I was 10 years old, I got a Rawlings special, a Stan Musial model.” He waved the small glove, still relatively supple, with the new silver trace from a felt pen — the beautiful signature of Stan Musial, just applied in person.

“It took me 57 years to get it,” Durbin said, his career and life now thoroughly fulfilled.

Sports are important enough to bring that smile of memory to family and friends and admirers. Sports count in a different way from the ultimate sacrifice paid by Dr. Thomas Emmett Little, who was honored posthumously, after being murdered while volunteering eye care to the people of Afghanistan in 2010. Sports do not exactly measure up against the bravery of Representative John Lewis, Democrat of Georgia, who was beaten during the civil rights era. But both big-time athletes honored Tuesday made their stands in their own ways.

Russell, now 77, spoke out against racism in the 1950s and ’60s when he was the heart of the Boston Celtics and then the first black coach in a major professional league in the United States.

“And he supported Muhammad Ali,” said Joe Morgan, the baseball Hall of Famer who was one of Russell’s guests, along with Jim Brown of football fame. Morgan said Russell had endorsed Cassius Clay’s right to adopt a Muslim name, an unpopular stand in its time. “It might not be Bill’s answer, but he supported Ali,” Morgan said.

Morgan played eight games as a rookie in 1963, when Musial was finishing the last of his 22 seasons and his 3,630 hits. He saw only traces of the fleet, ebullient slugger of the St. Louis Cardinals, who had charmed fans in Brooklyn, where he was named Stan the Man. But Morgan knew something else about Musial: in 1947, when some white players seemed recalcitrant about playing with or against Jackie Robinson, Musial noted that he had played with black teammates back in Donora, Pa. He never made a speech, but he put on his uniform.

For many years, the Musial family and admirers in St. Louis have felt he was not appreciated at the same level as Ted Williams, Joe DiMaggio and the great players who came afterward. But on Tuesday, Stan the Man, now 90 and tired, was back at the White House.

He first came here in 1962, the day after the All-Star Game, when he and his wife, Lil, and daughter Janet were invited by President John F. Kennedy — “my buddy,” Musial called him. A young senatorial aide, John H. Zentay, was Musial’s escort that day.

On Tuesday, Zentay, now a prominent lawyer in Washington, brought a photograph of Musial and Kennedy, taken that magical day. He showed the photo to Musial’s grandson Brian Schwarze, his constant aide in his old age. A woman standing nearby looked at the photograph and said, “That’s my brother.” It was Jean Kennedy Smith, herself a recipient of the medal.

Athletes have often been welcome in the White House. Bill Russell and Stan Musial now belong with other Presidential Medal of Freedom winners, at the core of American life.
Posted by Monte at Tuesday, February 15, 2011