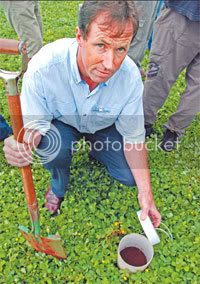 Image: NSW DPI environmental scientist Steve Kimber shows one of the chambers used to monitor greenhouse gases emitted from the Wollongbar trial plot. Credit: NSW DPI.
New research confirms the huge and revolutionary potential of soils to reduce greenhouse gases on a large scale, increase agricultural production while at the same time delivering carbon-negative biofuels based on feedstocks that require less fertilizer and water. Trials at Australia's New South Wales Department of Primary Industries’ (DPI) Wollongbar Agricultural Institute show that crops grown on agrichar-improved soils received a major boost. The findings come at a time when carbon-negative bioenergy is becoming one of the most widely debated topics in the renewable energy and climate change community.

The Australian trials of 'agrichar' or 'biochar' have doubled and, in one case, tripled crop growth when applied at the rate of 10 tonnes per hectare. The technique of storing agrichar in soils is now seen as a potential saviour to restore fertility to depleted or nutrient-poor soils (especially in the tropics), and as a revolutionary technique to mitigate climate change. Moreover, agrichar storage in soils is a low-tech practise, meaning it can be implemented on a vast scale in the developing world, relatively quickly.

Agrichar is a black carbon byproduct of a process called pyrolysis, which involves heating biomass without oxygen to generate renewable energy. Pyrolysis of biomass results in the production of bio-oil, that can be further refined into liquid biofuels for transport (earlier post, on Dynamotive's trials). When the agrichar is consequently sequestered into soils, the biofuels become carbon-negative - that is, they take more carbon dioxide out of the atmosphere than they release. This way, they can clean up our past emissions. No other renewable energy technology has both the advantages of being carbon-negative while at the same time being physically tradeable.

“So it is not surprising there is so much interest in a technology to create clean energy that also locks up carbon in the soil for the long term and lifts agricultural production,” he said.

Multiple benefits
The trials at Wollongbar have focused on the benefits of agrichar to agricultural productivity: “When applied at 10t/ha, the biomass of wheat was tripled and of soybeans was more than doubled,” said Dr Van Zwieten. This percentage increase remained the same when applications of nitrogen fertiliser were added to both the agrichar and the control plots. For the wheat, agrichar alone was about as beneficial for yields as using nitrogen fertiliser only. And that is without considering the other benefits of agrichar.

Long term carbon storage
NSW DPI environmental scientist Steve Kimber said an added benefit for both the farmer who applies agrichar and the environment is that the carbon in agrichar remains locked up in the soil for many years longer than, for example, carbon applied as compost, mulch or crop residue.

“We broadly categorise carbon in the soil as being labile (liable to change quickly) or stable – depending on how quickly they break down and convert into carbon dioxide,” he said. “Labile carbon like crop residue, mulch and compost is likely to last two or three years, while stable carbon like agrichar will last up to hundreds of years.

“This is significant for farmer costs because one application of agrichar may be the equivalent of compost applications of the same weight every year for decades. “For the environment, it means soil carbon emissions can be reduced because rapidly decomposing carbon forms are being replaced by stable ones in the form of agrichar.”

Unfortunately, agrichar is not widely available yet. BEST Energies Australia, a company involved with NSW DPI in the trials, has a pilot plant at Gosford which is producing minimal amounts for research purposes. “We are hoping the technology will take hold and pyrolysis plants will be built where there is a steady stream of green or other biomass waste providing clean energy that is carbon negative,” Dr Van Zwieten said. “But until pyrolysis plants are up and running, the availability of agrichar for farmers will be scarce.”

Organic matter or biomass, including green or feedlot wastes, is converted to char during pyrolysis, a thermochemical process conducted in the absence of oxygen. Between 25 and 70 per cent of the dry feed material is converted during pyrolysis into a high-carbon char material which is far more stable than the original biomass.

In the Amazon today, these highly fertile soils are prized. Created by pre-Columbian populations thousands of years ago through the addition of charred organic matter, terra preta continues to be staggeringly productive despite being intensively cultivated.

BEST Energies Australia first began working on the pyrolysis process 10 years ago and now has a fully operational demonstration plant on the NSW Central Coast with the capacity to take 300 kilograms of biomass per hour.

NSW Department of Primary Industries (DPI) formed a research partnership with BEST to investigate the potential of agrichar products as soil amendments which could boost profitability while also sequestering carbon and reducing greenhouse emissions. Initial laboratory trials conducted by DPI found that by matching soil type to char from certain feedstocks and processing conditions, yields of some crops more than doubled.

NSW has a vast untapped biomass resource from a variety of waste streams, estimated to be about seven megatonnes of biomass a year.
Posted by Monte at Thursday, April 08, 2010

You can find a lot of information and links on our Pacific Pyrolysis website http://www.pacificpyrolysis.com

Pacific Pyrolysis is commercialising technology, which through the co-production of renewable energy and biochar from sustainable feedstocks, results in a net removal of greenhouse gases from the atmosphere.

Pacific Pyrolysis Pty Limited has an exclusive license to exploit the proven BEST Energies slow pyrolysis technology in the Asia Pacific region through commercial deployment to solve a number of the sustainability issues facing businesses. The technology converts non food biomass into renewable energy and a proprietary biochar called Agrichar™, that has been proven by independent trials to increase food production and sequester carbon over long periods of time.