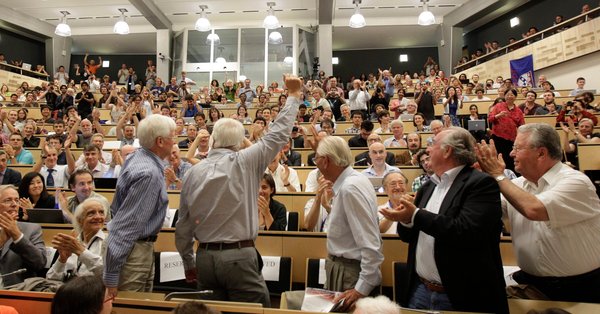 Scientists in Geneva on Wednesday applauded the discovery of a subatomic particle that looks like the Higgs boson. Pool photo by Denis Balibouse

ASPEN, Colo. — Signaling a likely end to one of the longest, most expensive searches in the history of science, physicists said Wednesday that they had discovered a new subatomic particle that looks for all the world like the Higgs boson, a key to understanding why there is diversity and life in the universe.

Like Omar Sharif materializing out of the shimmering desert as a man on a camel in “Lawrence of Arabia,” the elusive boson has been coming slowly into view since last winter, as the first signals of its existence grew until they practically jumped off the chart.

“I think we have it,” said Rolf-Dieter Heuer, the director general of CERN, the multinational research center headquartered in Geneva. The agency is home to the Large Hadron Collider, the immense particle accelerator that produced the new data by colliding protons. The findings were announced by two separate teams. Dr. Heuer called the discovery “a historic milestone.”

He and others said that it was too soon to know for sure, however, whether the new particle is the one predicted by the Standard Model, the theory that has ruled physics for the last half-century. The particle is predicted to imbue elementary particles with mass. It may be an impostor as yet unknown to physics, perhaps the first of many particles yet to be discovered.

That possibility is particularly exciting to physicists, as it could point the way to new, deeper ideas, beyond the Standard Model, about the nature of reality.

For now, some physicists are simply calling it a “Higgslike” particle.

“It’s something that may, in the end, be one of the biggest observations of any new phenomena in our field in the last 30 or 40 years,” said Joe Incandela, a physicist of the University of California, Santa Barbara, and a spokesman for one of the two groups reporting new data on Wednesday.

Here at the Aspen Center for Physics, a retreat for scientists, bleary-eyed physicists drank Champagne in the wee hours as word arrived via Webcast from CERN. It was a scene duplicated in Melbourne, Australia, where physicists had gathered for a major conference, as well as in Los Angeles, Chicago, Princeton, New York, London and beyond — everywhere that members of a curious species have dedicated their lives and fortunes to the search for their origins in a dark universe.

In Geneva, 1,000 people stood in line all night to get into an auditorium at CERN, where some attendees noted a rock-concert ambience. Peter Higgs, the University of Edinburgh theorist for whom the boson is named, entered the meeting to a sustained ovation.

Confirmation of the Higgs boson or something very much like it would constitute a rendezvous with destiny for a generation of physicists who have believed in the boson for half a century without ever seeing it. The finding affirms a grand view of a universe described by simple and elegant and symmetrical laws — but one in which everything interesting, like ourselves, results from flaws or breaks in that symmetry.

According to the Standard Model, the Higgs boson is the only manifestation of an invisible force field, a cosmic molasses that permeates space and imbues elementary particles with mass. Particles wading through the field gain heft the way a bill going through Congress attracts riders and amendments, becoming ever more ponderous.

Without the Higgs field, as it is known, or something like it, all elementary forms of matter would zoom around at the speed of light, flowing through our hands like moonlight. There would be neither atoms nor life.

Physicists said that they would probably be studying the new particle for years. Any deviations from the simplest version predicted by current theory — and there are hints of some already — could begin to answer questions left hanging by the Standard Model. For example, what is the dark matter that provides the gravitational scaffolding of galaxies?

And why is the universe made of matter instead of antimatter?

“If the boson really is not acting standard, then that will imply that there is more to the story — more particles, maybe more forces around the corner,” Neal Weiner, a theorist at New York University, wrote in an e-mail. “What that would be is anyone’s guess at the moment.”

Wednesday’s announcement was also an impressive opening act for the Large Hadron Collider, the world’s biggest physics machine, which cost $10 billion to build and began operating only two years ago. It is still running at only half-power.

Physicists had been icing the Champagne ever since last December. Two teams of about 3,000 physicists each — one named Atlas, led by Fabiola Gianotti, and the other CMS, led by Dr. Incandela — operate giant detectors in the collider, sorting the debris from the primordial fireballs left after proton collisions.

Last winter, they both reported hints of the same particle. They were not able, however, to rule out the possibility that it was a statistical fluke. Since then, the collider has more than doubled the number of collisions it has recorded.

The results announced Wednesday capped two weeks of feverish speculation and Internet buzz as the physicists, who had been sworn to secrecy, did a breakneck analysis of about 800 trillion proton-proton collisions over the last two years.

Up until last weekend, physicists at the agency were saying that they themselves did not know what the outcome would be. Expectations soared when it was learned that the five surviving originators of the Higgs boson theory had been invited to the CERN news conference.

The December signal was no fluke, the scientists said Wednesday. The new particle has a mass of about 125.3 billion electron volts, as measured by the CMS group, and 126 billion according to Atlas. Both groups said that the likelihood that their signal was a result of a chance fluctuation was less than one chance in 3.5 million, “five sigma,” which is the gold standard in physics for a discovery.

On that basis, Dr. Heuer said that he had decided only on Tuesday afternoon to call the Higgs result a “discovery.”

He said, “I know the science, and as director general I can stick out my neck.”

Dr. Incandela’s and Dr. Gianotti’s presentations were repeatedly interrupted by applause as they showed slide after slide of data presented in graphs with bumps rising like mountains from the sea.

Dr. Gianotti noted that the mass of the putative Higgs, apparently one of the heaviest subatomic particles, made it easy to study its many behaviors. “Thanks, nature,” she said.

Gerald Guralnik, one of the founders of the Higgs theory, said he was glad to be at a physics meeting “where there is applause, like a football game.”

Asked to comment after the announcements, Dr. Higgs seemed overwhelmed. “For me, it’s really an incredible thing that’s happened in my lifetime,” he said.

Dr. Higgs was one of six physicists, working in three independent groups, who in 1964 invented what came to be known as the Higgs field. The others were Tom Kibble of Imperial College, London; Carl Hagen of the University of Rochester; Dr. Guralnik of Brown University; and François Englert and Robert Brout, both of Université Libre de Bruxelles.

One implication of their theory was that this cosmic molasses, normally invisible, would produce its own quantum particle if hit hard enough with the right amount of energy. The particle would be fragile and fall apart within a millionth of a second in a dozen possible ways, depending upon its own mass.

Unfortunately, the theory did not describe how much this particle should weigh, which is what made it so hard to find, eluding researchers at a succession of particle accelerators, including the Large Electron Positron Collider at CERN, which closed down in 2000, and the Tevatron at the Fermi National Accelerator Laboratory, or Fermilab, in Batavia, Ill., which shut down last year.

Along the way the Higgs boson achieved a notoriety rare in abstract physics. To the eternal dismay of his colleagues, Leon Lederman, the former director of Fermilab, called it the “God particle,” in his book of the same name, written with Dick Teresi. (He later said that he had wanted to call it the “goddamn particle.”)

Finding the missing boson was one of the main goals of the Large Hadron Collider. Both Dr. Heuer and Dr. Gianotti said they had not expected the search to succeed so quickly.

So far, the physicists admit, they know little about their new boson. The CERN results are mostly based on measurements of two or three of the dozen different ways, or “channels,” by which a Higgs boson could be produced and then decay.

There are hints, but only hints so far, that some of the channels are overproducing the boson while others might be underproducing it, clues that maybe there is more at work here than the Standard Model would predict.

“This could be the first in a ring of discoveries,” said Guido Tonelli of CERN.

In an e-mail, Maria Spiropulu, a professor at the California Institute of Technology who works with the CMS team of physicists, said: “I personally do not want it to be standard model anything — I don’t want it to be simple or symmetric or as predicted. I want us all to have been dealt a complex hand that will send me (and all of us) in a (good) loop for a long time.”

Nima Arkani-Hamed, a physicist at the Institute for Advanced Study in Princeton, said: “It’s a triumphant day for fundamental physics. Now some fun begins.”
Posted by Monte at Thursday, July 05, 2012