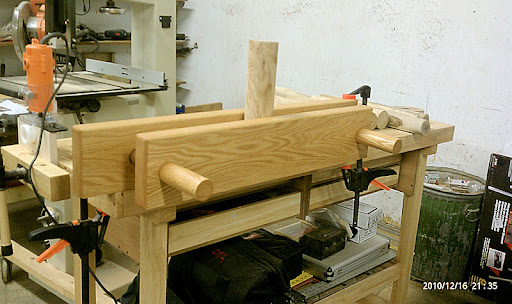 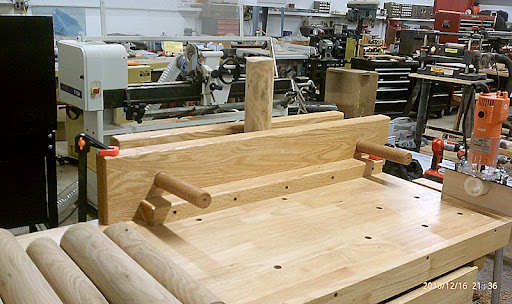 Back View
Posted by Monte at Thursday, December 16, 2010 No comments:

Quartersawn white and red oak are my favorite woods. The vertical lines on the end grain in the photo above are the growth rings, and the thin, almost horizontal lines are the medullary rays that radiate from the center of the tree out to the edge. When a ray crosses the surface of a board, the flaked figure appears. Quartersawn logs are more stable and are less likely to shrink, expand, and warp.

Credits: http://blogs.popularwoodworking.com/editorsblog/Frank+Miller+Lumber+Road+Trip.aspx
Posted by Monte at Wednesday, December 15, 2010 No comments:

Our Reliance on Plants is Increasing

download large image (3 MB, JPEG) acquired 2005
download GeoTIFF file (115 MB, TIFF)
Take a look around you: Chances are good that you’re touching at least one thing that came from a plant. We build our homes, furniture, and other structures from wood products; we use plants like cotton and flax (linen) to make cloth for clothing, towels, bedding, and more; we eat a variety of plants and cook with wood; some of our vehicles run on biofuels; and we rely on animals that eat plants for food, transportation (in some places), and other products like wool and leather. Much of what we use every day comes from plants, and new research led by Marc Imhoff at NASA Goddard Space Flight Center is showing that our reliance on plants is increasing.

Between 1995 and 2005, the global demand for plant matter went up about five percent. In 1995, we required 20.3 percent of the plant material Earth currently produces (the photosynthetic capacity of the land). By 2005, that number increased to 25.6 percent both because each person is using more plant products and because there are more of us. Imhoff and his team reached these conclusions by comparing the rate at which people require plant products, in terms of carbon, to the rate that the Earth can produce plant carbon.

This map shows the comparison for 2005. The colors represent the ratio between the amount of carbon people require and the amount of carbon Earth produced. At the top of the scale (dark red), the population needs at least ten times more plants than are grown locally. At the lower end of the scale (dark green), the land produces more vegetation that the local population needs. Gray areas are places where people in the area use less than 10 percent of the vegetation growing there. In the center of the scale (pale yellow) people use most of the vegetation.

In general, the greatest use of plant products occurs in highly populated regions, like Asia and large cities, and places that can not produce enough to support the population’s requirements for plants, such as the African Sahel. Because these places use everything they grow and still need vegetation from elsewhere, they are very vulnerable to changes in climate that would reduce production and disruption in transportation that would make it more difficult to bring food and other plant products from other places.

The map shows the pressure on local ecosystems, but not per capita use. For example, in the United States, each person uses 5.94 metric tons of carbon (vegetation) per year, while in South-central Asia, people use 1.23 metric tons per year. However, the United States produces more than it requires, so the ratio between usage and vegetation is low. South-central Asia, on the other hand, uses less per person, but it has a high population that collectively require more carbon than the land produces, and so must import products from other regions.

“What we’re realizing is the biosphere doesn’t care whether you have a lot of people consuming a little or a few people consuming a lot. It’s the total amount or rate relative to what can be produced that is important,” says Imhoff. “Right now, humans are increasing both population and per capita consumption.” For this reason, it is important to monitor vegetation and land use on a global scale.

The vegetation measurements used to produce the map (net primary productivity) are a measure of the amount of carbon plants convert into plant matter (biomass) as recorded by the Moderate Resolution Imaging Spectroradiometer (MODIS) on NASA’s Terra and Aqua satellites. (Earlier research from 1995 used measurements from another sensor, AVHRR.)

The researchers measured the requirement for plant products by using statistics from the United Nations Food and Agriculture Organization, which reports how much food, livestock, and wood products each country produces, imports, and exports. They calculated usage by first determining what each country produces and imports and then subtracting exports. They calculated the amount of plant material (carbon) required to support such usage by using models that translate between final products, like flour, beef, or paper, and the amount of plant material required to produce the products. Finally, they divided by the population of the country to figure out how many plant products each person in the country uses on average. In the map, the requirement for plant products is mapped by population distribution.

When comparing carbon requirements and production for 2005 to earlier figures from 1995, Imhoff found that people were using about five percent more of Earth’s vegetation in 2005. “People worry about that percentage. If, in future scenarios, it’s going to go up to something like 50 percent, we’re looking at a very high demand for land management at all levels on the landscape. We would be heading toward a place where the planet would be very carefully managed, from end to end.”

To see an interview with Dr. Imhoff and to read more about this work, see How hard are we pushing the land? on the NASA web site. Woodgears.ca is a wonderful site for woodworkers. Lots of great ideas and ingenious plans for tools. Matthias Wandel is a 2nd generation woodworker who is also an engineer. He shares his plans and projects. I especially like his pages on his father's beginnings  and his ideas, equipment, ..., and works (My dad's sawmill & My dad's woodworking workshop). If you are interested in woodworking, get ready to spend some time on this great site! ... Monte
Posted by Monte at Tuesday, December 14, 2010 No comments: