The former Cards' great took in Game 4 of the NLCS between the Cards and Giants at Busch Stadium on Thursday, 10-19-2012. Musial also rode around the ballpark, receiving a huge applause from the fans -- because, well, he's the man. 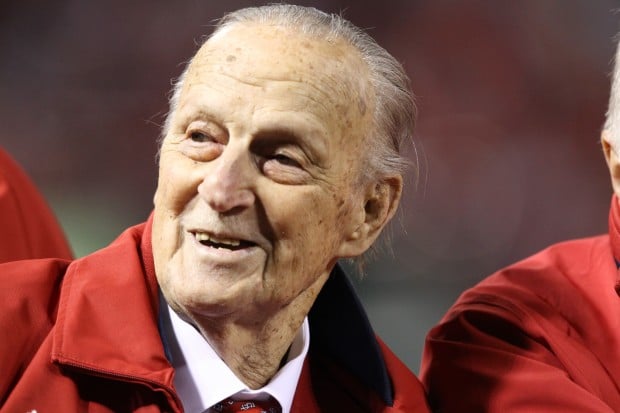 Cardinals legend Stan Musial makes a surprise appearance before Game 4 of the National League Championship Series between the St. Louis Cardinals and the San Francisco Giants on Thursday, Oct. 18, 2012, at Busch Stadium. Photo by J. B. Forbes, jforbes@post-dispatch.com
BY DAN O'NEILL

Five things worth mentioning about Game 4 of the National League Championship Series on Thursday at Busch Stadium:

The Cardinals made it a memorable night, Stan Musial made it a Perfect Knight. Approaching his 92nd birthday, the living legend was introduced before the game as goose bumps ran wild.

Musial was chauffeured around the stands wearing a Cardinals jacket and waving to fans. Classy Giants skipper Bruce Bochy shook hands with No. 6 and players from both dugouts applauded as Musial handed a game ball to manager Mike Matheny.

It was William Shakespeare who wrote, "Be not afraid of greatness; some are born great, some achieve greatness, and some have greatness thrust upon them."

And some are just The Man.