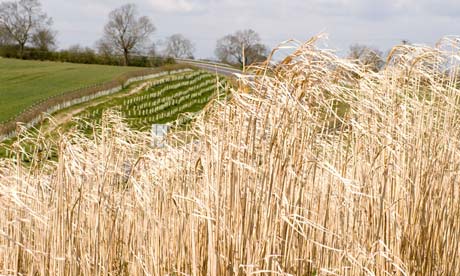 Miscanthus giganteus is a tall grass grown on European farms as a biofuel, such as this crop in rural Northamptonshire. Photograph: Alamy

The production of biofuels, good thing or not, will be decided by the setting of targets in the big western energy markets, right? Wrong, said bio-energy expert Jeremy Woods, at Imperial College, when I spoke to him yesterday.

He thinks biofuel production could pass a tipping point and start to rocket as rising oil prices make the plant-derived fuel cheaper in many developing countries around the world.

"Once oil is over $70 a barrel, conventional and new generation biofuels become cost competitive, certainly with tar sands and shale, and with oil from much of the Middle East and Brazil's new offshore fields," he says. "When oil and biofuels are competitive, we are into a different world."

Even more striking is his suggestion that this biofuel boom is most likely to happen in those developing countries that have fast growing populations and food needs. That's because those countries, including many African nations, are particularly vulnerable to high oil costs, for both transport and farming.

But Woods is not an opponent of biofuels. "Bioenergy done well is absolutely needed," he told me, at a Royal Society event titled Reducing greenhouse gas emissions from agriculture. He believes projects that work with smallholders and ensure benefits are kept within the country can produce biofuels responsibly. "Delivering investment in this way may be the only way to raise yields," he adds.

However, there are risks too, he says, and these are greater if demand drives the production of large volumes in a short period of time. In that scenario, foreign companies or governments would secure vast tracts of land and export all the fuel and profits. That will exacerbate existing problems in the host country, he says, and could lead to people being driven off the land. "The harder you pull the lever [of biofuel production], the more likely you are to get competition between fuel and food.

Also yesterday, an unexpected benefit of some biofuel production was revealed in a scientific paper - they can cool the local area by as much a 2C.

The modelling study, by Matei Georgescu at Arizona State University and colleagues, indicated that replacing conventional crops such as wheat and maize with perennial grasses used for biofuel production cut temperatures.

Georgescu says he is not advocating a widespread switch, but that this cooling phenomenon should be taken into account when making decisions about biofuels. "It dawned on me that some mechanisms were not being accounted for in this topic which has implications for millions of people," he told me.

The cooling happens for two reasons. First, the grasses - switchgrass or miscanthus - cover the ground for more of the year, preventing the sun heating the ground. Second, and more important, the plants transpire more, i.e. they evaporate more water into the atmosphere.

All this is unlikely to persuade some that biofuels can be green. Keith Taylor, the Green Party MEP for South East England said on Monday: "Although biofuels come from plants they are not a 'green' solution. Growing, transporting and burning biofuels has devastating effects on people and the environment both in the UK and around the world."

Keith added: "Relying on biofuels to solve our energy crisis simply dumps the problem on developing countries. What we need is more efficient use of energy and committed investment in clean renewables like wind, solar and tidal power."

We'll be following the biofuel story closely in the future, so feel free to let me know what you think we should be looking at in the comments below.
Posted by Monte at Tuesday, March 01, 2011